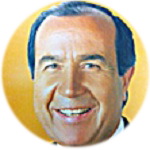 Founder Chairman of Board

Mr. Büyükkaya has been the leader and founder of uncountable innovations and success stories within the insurance sector. After graduating School of Economics he finalized his Masters degree and Doctorate and attained training in Britain and France. He started as a bureaucrat at the Prime Ministry Insurance Supervision Board and continued with the private sector at Imtas Insurance Company Technical AGM for five years, Ak Insurance GM for eight years, and founded Merkez Insurance Company and formed this company to be one of the 10 largest insurance companies of Turkey. He also worked as an independent consultant to AON Group International, one of the largest insurance groups of the world.

He entered the Turkish Parliament after the 2002 elections as the representative from Istanbul and served for 9 years with different powers and served as the Assistant Minister of the Ministry of European Union between September 2012 and February 2015. Having written 9 books and over 200 essays on insurance, his life has been compiled as a book named “You Shall Not Walk Alone” and printed in 2014. Büyükkaya is fluent in English, French and German.